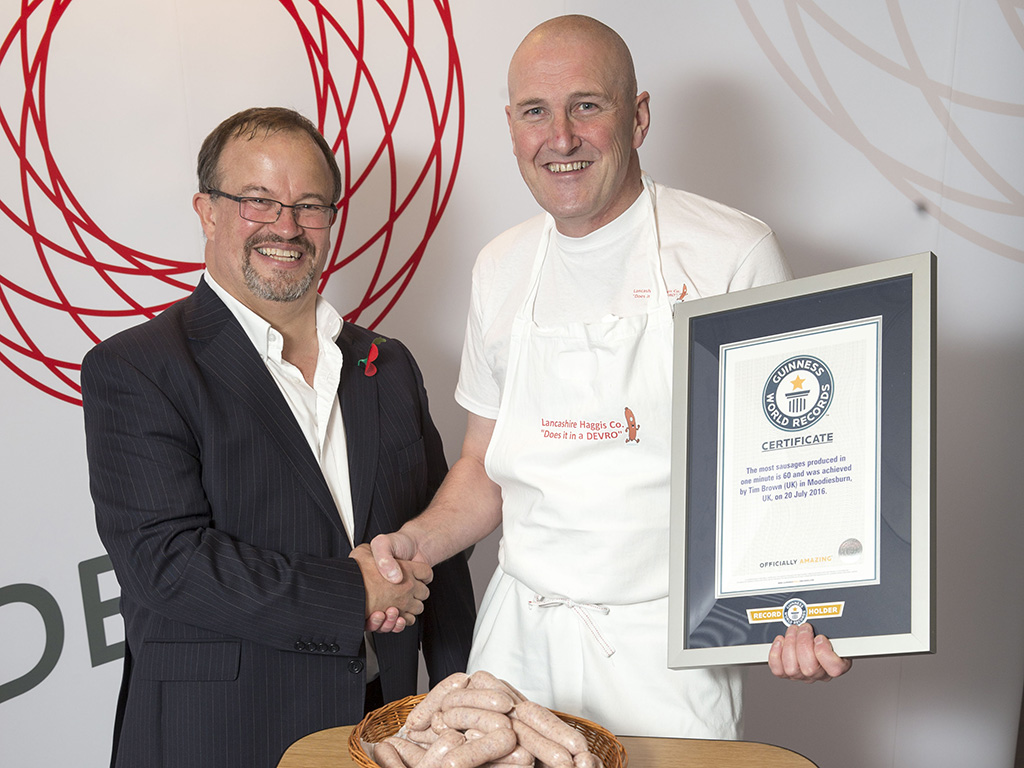 Devro, the Glasgow based world leading manufacturer of collagen casings “linked” up with first class butcher Tim Brown of ‘Lancashire Haggis Co’ to set a new Guinness World Record for the number of sausages made in 60 seconds.

Tim, a Fourth generation butcher from Browns of Chorley in Lancashire put his over 25 years of experience into making 60 fresh sausages inside a minute earning himself a new Guinness World Record in the process by breaking the previous approved world record of 44.

This record attempt was be hosted by Devro, the only manufacturer of collagen casings in the UK, at its plant in Moodiesburn, Glasgow.

The record attempt has now been officially verified by the Guinness World Records team and Tim was presented with his official certificate at Devro, Moodiesburn.
Tim Brown, Co-owner of Brown’s of Chorley commented:

“Making sausages is one of the parts of being a butcher I enjoy most. So becoming the world record holder is quite incredible. It just started as a bit of fun when the guys at Devro were challenging customers to see who could make the most sausages in a minute using a new product they launched but it turns out I’m the best in the world.

“I’m the fourth generation to run our family butchers with my brother Chris and look forward to displaying the new record breaking award in the store. Who knows maybe one day my kids or grandkids can have a go at breaking the record themselves.”

“We’re very proud of Tim for becoming a world record breaker and delighted that our casings have played a key part in setting the record.”

‘Brown’s the Butchers’ has been serving the finest meats since 1932 and have been members of the Scottish Meat Federation for over 15 years.

From great grandfather, to father and sons, four generations of butchers who value the quality and taste of food above all else. Browns are a small team of butchers ,who are guided by John (father) who is one of a small decreasing number of master butchers left in the country, food technologists and food lovers who specialise in producing traditional, nose-to-tail classics.